We believe that education can change our attitude and the world we live in.

It is hard to comprehend that somewhere in the world there are still places where everything is so much different from what we know, where life of a human being is of no value at all, women are kept at home as if in a prison, and a young couple is not allowed to walk the city streets holding hands, where people live in houses made of clay with ragged foil windows that do not provide decent protection from the cold, people can neither read nor write, homes where the streets outside are battlegrounds, where war is being fought because there are no other perspectives.

The “Education for Peace” Association activities 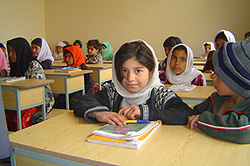 It is safe and secure inside the new school

Poor countries of the South are in need of almost everything: food, clothing, medicines, new technologies, and well-tried models of management. The main focus of our attention, however, has been education as we firmly believe that lack of basic education hinders any independent growth in such countries as Afghanistan, India, Pakistan and Kirghizstan. If we help young people of these countries gain knowledge and become educated today, they will be able to shape the reality they live in in their own fashion and improve their standard of living for the future. Support given in the field of education is a direct investment in the future long-term development of particular countries and is not just a temporary palliative.

We believe that values cannot be introduced by force; we do not wish to say what is right and what is wrong. In our opinion it is education and knowledge that help to find answers to these questions and enables people to decide which choices should be made in their private, professional and social life.

In the course of work for the Association we have established many direct contacts with people living in countries which are, in an opinion current in the West, held to be hostile towards the West and its values. Thanks to our projects and thanks to direct, personal relations that have been and are being established in the course of our work, as well as to the exchange of thoughts and opinions between us and them, the Western world becomes closer, more friendly and comprehensible to them.

Our attention is drawn to Afghanistan, Tibet (PRC), India, the Caucasus, Africa…

We intend to reach out to all those places in the world where our aid is needed… and we have been effective in doing so. 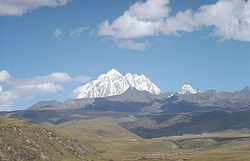 Our activity has been carried out mainly in the regions lying outside Europe that have been poverty-stricken or afflicted by war. Our motives go beyond the basic human need to help those whose living conditions are much worse than ours, as our strong conviction is that poverty, lack of education and stunted development in the non-European regions has a direct impact on safety and economic growth on our continent, including Poland.

We benefit from the aid we give to others!

Why is our activity carried out outside Poland? Most of us, while visiting various countries in Africa and Asia, have had the chance to see at first hand the enormous poverty and economic backwardness in those countries. It is difficult to imagine that from the perspective of people living in such countries as Afghanistan, India or Tanzania, Poland is a Paradise on Earth. Knowing that should encourage us to take action.

Though letâs not set Poland aside. Our social endeavours and voluntary work involves Polish college and university students; aiding others makes them socially aware, more responsible and provides them with the professional and life experience which they will need in their future professional careers.

We build new schools and rebuild the destroyed ones 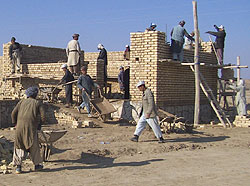 A new school is under construction! (Photo taken at the school building complex construction site in Qaramqul)

(Photo taken at the school building complex construction site in Qaramqul)We encourage feuding families to take an active part in the process of school building, thus conciliating the belligerent parties. We collect study aids like textbooks, computers, writing materials, etc., and hand them over to those in need. Furthermore, we organize trainings for teachers, children, teenagers and women. We send out volunteers and train teachers. To those that have seen nothing apart from war we show that there is a better world and we provide them with better opportunities.

Our achievements in Afghanistan:

This is what a new school looks like! This is our first school. Mohmandan.

Our plans for the following two years include:

In Afghanistan we co-operate closely with VUSAF and  Afghanistan-Schulen , a German non-governmental organization, as well as the American-Afghan  Women for Afghan Women  Association.

A documentary titled Na Koncu Swiata (At the End of the World) that explores our projects has been made for Polish public television (TV premiere: TVP1, 04.01.2007; subsequently aired several times).

Our projects have been co-financed by the Polish Ministry of Foreign Affairs to whom we would like to express our gratitude. 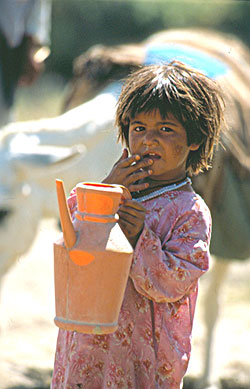 The strength of our Association lies in its diversity. Our staff members have different interests and come from different backgrounds and professions: we include professors, academic teachers, diplomats, orientalists, culture experts, economists, journalists, computer specialists, civil service workers, students of various departments, etc. Our diverse skills and rich professional experience enable us to easily establish and develop cooperation with representatives of various countries, to fulfil all the necessary formal and legal requirements concerning the activities of the Association, and, what is most important, to develop and implement given projects competently, professionally and efficiently in line with the expressed needs of local communities.

We are very happy with the fact that our Association embraces people from various countries: Afghanistan, Uzbekistan, Ukraine and, of course Poland.

We are eager to cooperate with everyone who wants to help others and is not going to be put off by the many difficulties that may arise in the course of time, as difficulties are there to be overcome.

Our work is that of public service as the activities carried out by the Association are not meant to generate income. Our intention is to make use of our skills and abilities to benefit those in greatest need. Working for the Association gives us a sense of time well spent – not only in a pleasant, but also in a very valuable and useful way.

Our Association was founded in July 2007. Previously most of us had been working for the “Schools for Peace” Association which was founded in 2002. Now, under the new name “Education for Peace” and with an extended remit, our competence and effectiveness is increasing. Our new Association benefits from the experience of people who were the originators, creators and direct executors of projects implemented in Afghanistan – the development of school building complexes in Mohmandan and Qaramqul.

The idea of such educational projects for Afghanistan and for other developing countries was conceived in Afghanistan in summer 2001 – at the time of the Taleban regime – in the course of a scientific journey made by one of us, a scientist lecturing at Warsaw University, who had been invited to Afghanistan by the legendary Ahmad Shah Masud  Wikipedia  oraz http://www.orient.uw.edu.pl/edu/sub_txt/pub_20010801.html). Following a subsequent open lecture given at the Warsaw University on the contemporary situation in Afghanistan, a number of listeners were drawn to the idea and felt that it needed to be given support. As a result, in 2002 we founded the “Schools for Peace” Association, gave it a name and developed a number of projects that seemed appropriate to its aims. In 2003, when the then President of the Association was lecturing at Hamburg University, we managed to get in touch and establish close cooperation with Afghanistan-Schulen, a non-governmental organization from Hamburg. We work actively with them to this day and have realised many projects together.

Our ranks have been joined by those who, in 2006, had the chance to teach English to Afghan children and instruct them as to how to cope with computers while working as volunteers within a project co-financed by the Polish Ministry of Foreign Affairs. At present our numbers are still growing as many people who have some free time to spend, a lot of fresh ideas and the good will to carry out educational activity in the countries of the South have become members of our Association. Anybody who has some experience in working in non-governmental organizations or while having no such experience is qualified in a way that would make him/her suitable for carrying out our aid activities is most welcome. Every little help matters, from creation and implementation of large projects to simple and mundane tasks like, for instance, packaging study aids for shipment.

Regulatory framework of our help